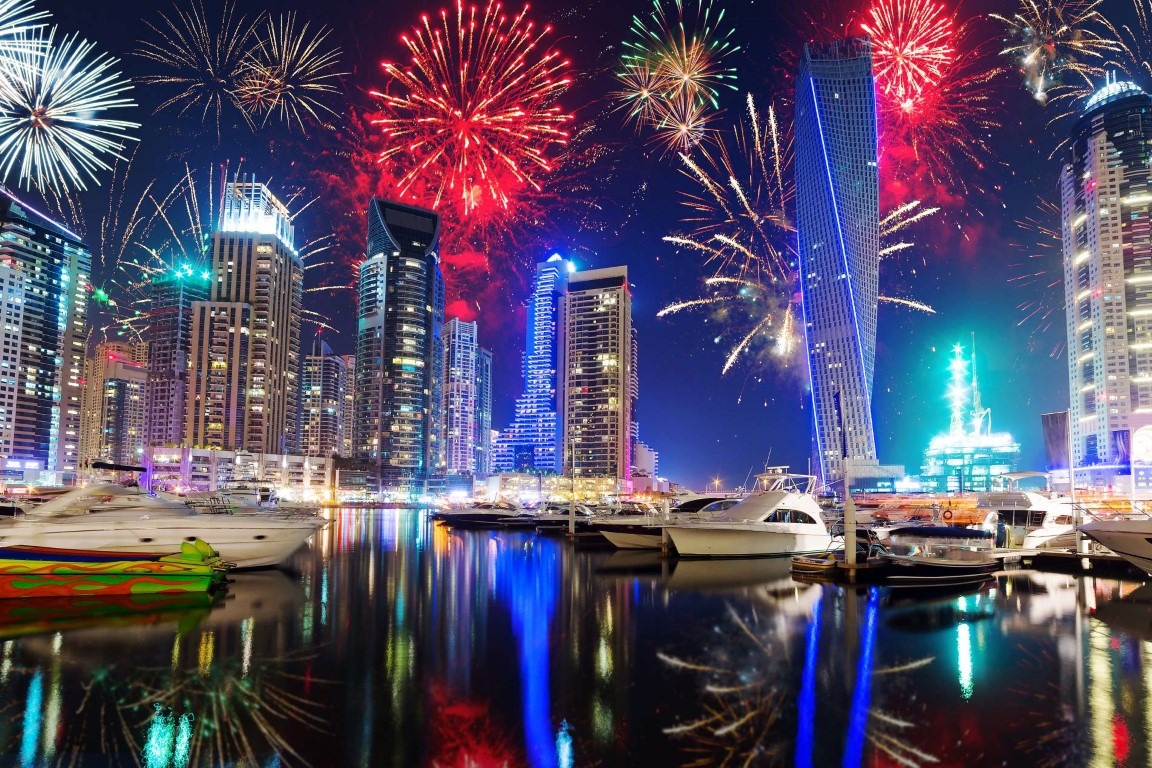 Dubai has become in recent years one of the most sought after destinations for travelers wishing to spend the New Year abroad.

Dubai fireworks are now famous for being among the most beautiful and spectacular in the world. Between the fireworks of Burj Khalifa, the world's tallest tower, Burj Al Arab, the only 7 * hotel in the world, Atlantis, Palm Island, Dubai Marina ...the different options available to visitors on the evening of 31 December are plenty.


Getting a place of choice to attend these fireworks is not easy though.
Millions of visitors, as well as residents and local people, are rushing to the front row to watch the New Year's fireworks in Dubai each year.


Where to see the fireworks ?

Several options are available for you to take part to the various fireworks shows in Dubai.
The restaurants located down the Burj Khalifa are generally the most popular and will offer you a breathtaking view of the tower fireworks on New Year's Eve. On the other hand the packages offered generally show ridiculously high prices for the 31st December in Dubai. A simple coffee shop with terrace at the Dubai Mall for example will sell the seat more than 250USD ... consumptions not included! The other restaurants or bar sell every year the precious places up to 500USD and more.


Beside the money, you will also have to spend lots of efforts to reach your destination, the area being totally closed since midday without any possibility to get there by car. The only option being public transport ... also used by hundreds of thousands of people in Dubai on 31st December.

Tables located at the restaurants surrounding the Burj Khalifa are usually fully booked several weeks, sometimes months in advance and you will not be able to enter the Dubai Mall perimeter on December 31st unless you can show a confirmed reservation to the security.

Taking some distance can sometimes be one of the best ways to enjoy the Burj Khalifa, Burj Al Arab or Atlantis fireworks on 31st December in Dubai. The best option to avoid the traffic congestion of New Year's Eve in Dubai is the cruise diners which will usually allow you to observe several fireworks at the same time, from the waters, and without the inconvenience of the crowd.

Comfortably seated on the boat upper deck, you can enjoy the view over several fireworks (depending on the cruise you choose) and avoid the terrible traffic jamming all the roads of Dubai leading to the fireworks locations, from early evening.

From a rate point of view, Dubai's New Year's Eve Cruise Diners are also a much more interesting pricewise as they usually include an unlimited 5* buffet and even sometimes unlimited drinks during the evening, as well as shows on-board for some cruises..

Formulaire ouvert
You need to login or create account

Save products on your wishlist to buy them later or share with your friends.